From Kings to Judges: Learning from the Political Rhetoric in the Book of Mormon 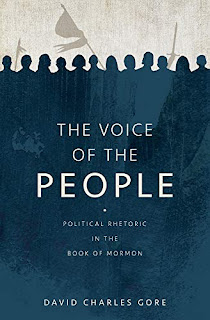 The end of Mosiah and beginning of Alma—the subject of our current Come, Follow Me study (Mosiah 29–Alma 4)—is one of the most complex periods in Book of Mormon history. It is a period of transition as they overhaul their political system, eliminating the monarchy and transitioning to a system of judges. At this time, the Nephite polity has become increasingly more cosmopolitan both religiously and politically, and they are still learning how to navigate those issues during the early years of Alma’s reign as chief judge, when challenges to their religious and political orders erupt.

This crucial transitionary period sets the stage for much of what follows in the book of Alma, and as such it deserves careful reading and analysis. The Voice of the People: Political Rhetoric in the Book of Mormon, a recent book by David Charles Gore (a professor and department head at the University of Minnesota Duluth), explores this section of the Book of Mormon (specifically, Mosiah 29–Alma 2) to see what we can learn about public discourse from this pivotal moment in Book of Mormon history.

After an introduction, Gore breaks his analysis down into five chapters. In the first chapter, Gore looks at the Nephite transition from kings to judges in light of the early Israelite transition from judges to kings, as recorded in 1 Samuel. Gore notes that the voice of the people plays a crucial role in both stories, and that matters of the heart prove to be of utmost importance in the outcomes both in ancient Israel and among the Nephites. Gore’s analysis here has some merit, and the relationship between the kings-to-judges vs. judges-to-kings narratives in the Book of Mormon and Bible deserves further consideration and exploration. Nonetheless, I felt this chapter was among the weaker parts of the book, as Gore’s engagement with biblical scholarship was generally superficial. Many Latter-day Saints may also find the skeptical, and even cynical, approach to King David which Gore adopts from the likes of Joel Baden and David Wolpe (among others) somewhat jarring.

In the next chapter, Gore focuses on how Mosiah’s recent translation of the Jaredite record provides important context to Mosiah’s decision to abolish kingship and shift the responsibility of the well-being of the polity from the one to the many. This is a subject which had briefly been explored before by the late John A. Tvedtnes, and I was pleased to see it receive greater exploration and in-depth analysis. As background here, Gore sketches out the social, religious, and political complexity that has developed in the land of Zarahemla with the merging the Nephites and Mulekites, and then the receiving of refugee groups led by Limhi and Alma the Elder. It was Limhi and his people who discovered the Jaredite record, and brought to Zarahemla for Mosiah to translate. Gore then discusses the succession crisis in the book of Ether (an abridgement of the record translated by Mosiah), and it’s parallels to both the story in 1 Samuel and the succession crisis described in Mosiah 29. This is followed by a summary of the political intrigue and backstabbing that unfolds as the Jaredites progressively march toward utter destruction—all due to the lusts of power among their kings. It is not hard to see the influence this narrative could had on Mosiah’s decision to abolish kingship.

Chapters 3, 4, and 5 then cover, respectively, Mosiah 29, Alma 1, and Alma 2, with emphasis on the types of political rhetoric employed by central characters such as Mosiah, Alma, Nehor, Gideon, and Amlici, and the implications and consequences thereof. The comparison, in chapter 4, of the Book of Mormon Gideon to the Gideon of the book of Judges in the Bible was particularly interesting and insightful. As one reads through these chapters (as well as in chapters 1 and 2), it becomes clear that Gore is not interested in merely understanding Book of Mormon rhetoric in the abstract, or simply for the sake of improving one’s appreciation of the Book of Mormon’s complexity—though his analysis may do that. Sprinkled throughout the book (but most especially in chapters 3–5) are Gore’s thoughts about what all of this means for public discourse today and how sincere followers of Christ should participate in civic engagement. These sections are sometimes meandering and repetitive, and do not always seem to be entirely grounded in analysis of the Book of Mormon text. Indeed, they sometimes seem quite tangential. Yet they are, nonetheless, insightful and stimulating.

Writing about politics and scripture can be a dangerous task. For starters, it runs the risk offending the sensibilities of one’s audience, should they be of a particular political persuasion which disagrees with your own views. The greater risk, however, is that it can be far too easy to read one’s own politics into scripture, and thus justify your own political convictions and condemn those of others. I am happy to say, however, that in my estimation, Gore generally avoids both of these risks. As I read, there were times when I was nodding in vigorous agreement with the principals of civic engagement that Gore extrapolated from the text, while at other times I found myself wrestling with what he had to say. But while I sometimes disagreed with Gore, I never felt like he was overtly pushing for an agenda.

The ultimate message of Gore’s book, if I have properly understood him, seems to be that political engagement as presently understood is ultimately limited in its capacity to change hearts and minds, precisely because it does not engage the heart the way theology can and must. Thus, instead of looking to political institutions for the solution of humanities problems, each and every individual must take personal responsibility for their own sins (to paraphrase Mosiah), that is for the role they play in society and in public discourse. Only by having each and every person turn their hearts toward caring for and helping others (rather than focusing on one’s self and seeking for power and gain, a la Amlici and Nehor) can our political institutions truly be transformed. Gore articulates this in a conclusion in which he relates it to the ancient Egyptian conceptions of the heart, thereby tying in the Book of Mormon’s own self-proclaimed ties to ancient Egyptian language.

While I did not agree with everything Gore said, either in his analysis of the text or his application to modern day political discourse, I have long believed Latter-day Saints ought not to be beholden to the political ideologies and philosophies of the day—whether they be conservative, liberal, libertarian, Marxist, and so on. These are, after all, philosophies of men. Rather, the Latter-day Saint is, I believe, called look at the world through the lens of the Gospel of Jesus Christ; that is, the Gospel should be the Saint’s worldview and ideology. This is, of course, challenging, and exact outcomes on specific political issues will almost certainly vary. I make no personal profession of perfectly practicing this myself—but it is what I personally strive to do. As I understood what Gore was aiming to accomplish in this book, it seems that he, too, was striving to use the Gospel—and specifically, the rhetorical principles exemplified in the Book of Mormon—as the primary guide to one’s political engagement. And in that endeavor, I applaud and encourage Gore and others.

For anyone else who is interested in letting scripture and gospel teaching guide their political discourse, I believe Gore’s book The Voice of the People: Political Rhetoric in the Book of Mormon is worthy of careful consideration.