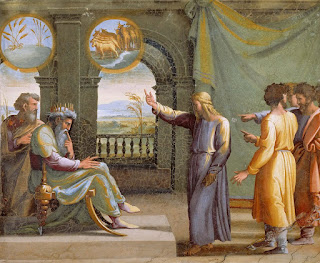 This week, for Come, Follow Me, we get to study Lehi’s final blessings to his sons before he passed away (2 Nephi 1–4). Among these chapters, 2 Nephi 2 tends to get the most attention, thanks to its clear teachings about the Fall. But I’d like, instead, to talk about 2 Nephi 3 for a minute. This is Lehi’s blessing to his son Joseph, and in it Lehi quotes from and provides commentary on prophecies made by Joseph of Egypt, Lehi’s ancestor. The manual for families and individuals focuses on the prophecy about the latter day seer who would also be named Joseph and would bring these records forth (2 Nephi 3:6–24). Lehi introduces this prophecy by explaining:

Wherefore, Joseph truly saw our day. And he obtained a promise of the Lord, that out of the fruit of his loins the Lord God would raise up a righteous branch unto the house of Israel; not the Messiah, but a branch which was to be broken off, nevertheless, to be remembered in the covenants of the Lord that the Messiah should be made manifest unto them in the latter days, in the spirit of power, unto the bringing of them out of darkness unto light—yea, out of hidden darkness and out of captivity unto freedom. (2 Nephi 3:5, emphasis added)

Drawing on (and reworking) this portion of the Book of Mormon, the Joseph Smith Translation of Genesis 50 portrays Joseph of Egypt giving a blessing to his posterity where he makes this prophecy:

And Joseph said unto his brethren, I die, and go unto my fathers; and I go down to my grave with joy. The God of my father Jacob be with you, to deliver you out of affliction in the days of your bondage; for the Lord hath visited me, and I have obtained a promise of the Lord, that out of the fruit of my loins, the Lord God will raise up a righteous branch out of my loins … And it shall come to pass that they shall be scattered again; and a branch shall be broken off, and shall be carried into a far country; nevertheless they shall be remembered in the covenants of the Lord, when the Messiah cometh; for he shall be made manifest unto them in the latter days, in the Spirit of power; and shall bring them out of darkness into light; out of hidden darkness, and out of captivity unto freedom. (JST Genesis 50:24–25, italics represent the JST expansions, bold my emphasis)

While we cannot document this as far back and Lehi’s day (let alone the much earlier period of the Patriarchs), there was a genre of literature in ancient Judaism called “testamentary literature,” in which many significant figures are portrayed as giving final blessings to their posterity. Lehi’s final blessings to his sons actually fit very well within this body of literature, and could rightly be called the “Testament of Lehi.”

Amongst this testamentary literature was a “Testament of Joseph,” which concludes with a prophecy which I find rather interesting, light of the JST and 2 Nephi passages quoted above:

Listen, my children, concerning the dream that I saw. Twelve stags were grazing at a certain place; nine scattered over the whole earth, and likewise also the three. And as I looked, the three stags became three lambs; they cried out to the Lord, and the Lord led them into a fertile, well-watered place. He led them out of darkness into Light. (Testament of Joseph 19:1–3, emphasis added)[1]

It is tempting to suggest that this is the prophecy Lehi was alluding to in 2 Nephi 3:5, which he believed referred to his own time. After all, it describes a portion of Israel being away “into a fertile, well-watered place,” and promises that they would be led “out of darkness into light”—which is nearly verbatim what Lehi says the Messiah would do for this branch of Israel in the latter days. The fact that it is three stags/lambs could even be interpreted as coinciding with Lehi (Manasseh), Ishmael (Ephraim), and Mulek (Judah), representing three of the twelve tribes.

But, alas, this text cannot be the source to which Lehi alludes. As I mentioned earlier, this ancient Jewish tradition cannot be documented back to Lehi’s day. The Testament of the Twelve Patriarchs—of which the Testament of Joseph is a part—dates to no earlier than the 2nd century BC.[2] Furthermore, the three stages/lambs most likely represent Judah, Benjamin, and Levi, the three tribes for which a portion was still known amongst the Second Temple Jews.[3]

Still, I think the similarity is striking. Perhaps 2 Nephi 3:5 and the Testament of Joseph 19:1–3 both echo an earlier source about Joseph’s prophecy, and in each case the author adapted (i.e., “likened”) the prophecy to their people and circumstances. This is purely speculative, of course, and so should be taken with a grain of salt. There may very well be no connection at all.

In any case, I personally find the fact that two different branches of Israel—the Lehites and the Second Temple Jews—both remember Joseph of Egypt making similar prophecies about a portion of the house of Israel rather interesting.