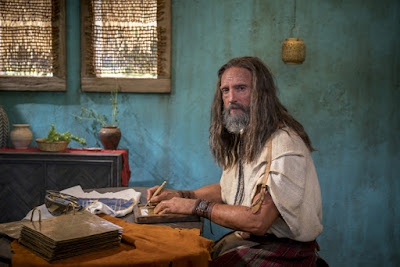 Previously, I have highlighted the testimonies of Jacob and Isaiah, two of Nephi’s three key witnesses of Christ (2 Nephi 11:1–3). Finally, after recording the sermons of Lehi (2 Nephi 1–4) and Jacob (2 Nephi 6–10) and extensively quoting and commenting on Isaiah (2 Nephi 12–30), Nephi is ready to conclude with his own witness of the doctrine of Christ (2 Nephi 31–33). Coming after a lifetime of challenging but faith-building experiences, Nephi bears a powerful, personal witness of his personal redeemer (2 Nephi 33:6).

How did Nephi build such a strong personal testimony of Jesus Christ? By both carefully analyzing this final section of Nephi’s record and by reviewing the whole of 1 and 2 Nephi, we can learn the sources Nephi drew upon to build-up his faith. Here are 5 sources I’ve noticed while studying Nephi’s record.

Nephi begins his record with acknowledgement of his “goodly parents” (1 Nephi 1:1) and they no doubt laid the foundations of his testimony as well. Indeed, Nephi stresses that he was “taught somewhat in all the learning of my father,” an education that certainly included religious instruction. Nephi more often highlights his father’s teachings throughout his record (discussed more below), but Sariah likely played a central and influential role as well. In fact, in ancient Israel, it was more often the mother who took the lead in family religious practice.

Although only briefly mentioned, Sariah’s testimony is included in Nephi’s record. After a faith-trying experience worrying about the sons she lovingly raised and taught to trust in the Lord, Sariah rejoiced at their return with these words: “Now I know of a surety that the Lord hath commanded my husband to flee into the wilderness; yea, and I also know of a surety that the Lord hath protected my sons, and delivered them out of the hands of Laban, and given them power whereby they could accomplish the thing which the Lord hath commanded them” (1 Nephi 5:8).

Nephi’s goodly parents—including his mother, Sariah—were no doubt the earliest source of his faith in the Lord.

For Nephi there is substantial overlap between the testimony of living prophets and the testimony of his parents, since so much of the narrative takes place in the wilderness, where Lehi served as the prophet for the family. But we do have some indication that he heeded the testimony of other prophets as well. Nephi knew of “many prophets” in the land (1 Nephi 1:4). He had access to at least some of Jeremiah’s teachings on the brass plates (1 Nephi 5:13) and was concerned to learn that Jeremiah was in prison (1 Nephi 7:14). His father Lehi, however, was the living prophet he learned the most from about the Messiah.

Lehi testified and taught about the Messiah from the beginning of his prophetic ministry (1 Nephi 1:19). He foretold of specific events in the Messiah’s life and of his sacrificial death and resurrection (1 Nephi 10:4–12). It was from Lehi that Nephi first learned of the baptism of Christ, a knowledge which figures prominently in Nephi’s own teachings about the doctrine of Christ (see 1 Nephi 10:7–10; 2 Nephi 31:4–9). Lehi also taught clearly about the central role of the Atonement in the plan of salvation (2 Nephi 2), a teaching that evidently had impact on his righteous sons, since Jacob (at Nephi’s request) passed this teaching on to Nephi’s people (2 Nephi 9).

The mark of Lehi’s teaching on Nephi can be seen in the way Nephi’s final testimony echoes that of his father, who testified, “Behold, the Lord hath redeemed my soul from hell” (2 Nephi 1:15; cf. 33:6).

Nephi also learned a great deal from past prophets whose words were recorded on the plates of brass. He quoted Messianic prophecies from Zenos, Zenock, and Neum (1 Nephi 19:10–12; cf. Helaman 8:13–20). And then, of course, there was Isaiah, who is, in the words of Elder Jeffrey R. Holland, “by every standard the messianic prophet of the Old Testament and as such is the most penetrating prophetic voice in that record.”[1] Nephi evidently felt the same, even with the additional prophetic voices just mentioned.

Nephi delighted in the words of Isaiah (2 Nephi 11:2), so much so that he copied extensive amounts down into his record (1 Nephi 20–21; 2 Nephi 12–24), commissioned his brother Jacob to use Isaiah’s words in his discourse (2 Nephi 7–8), and made him one of his three-key witnesses. For Nephi, Isaiah’s words helped him express his own prophetic worldview. He felt a kinship with Isaiah, because Isaiah “verily saw my Redeemer, even as I have seen him” (2 Nephi 11:2).

Much of Nephi’s own understanding of the Messiah can be related to Isaiah’s prophetic words.

At the beginning of his record, Nephi mentions “the mysteries of God” (1 Nephi 1:1), a term related to the temple worship in the ancient Near East. One of the first things Nephi did when his people established a new city was build a temple (2 Nephi 5:16). According to some scholars, Nephi’s entire record (both 1 and 2 Nephi) follow’s the pattern of the ancient Israelite temple theology, with these final chapters where Nephi bears his most powerful and personal testimony representing the part where the high priest passes through the veil into the presence of the Lord.

Shon Hopkin has illustrated how Nephi’s teachings about the doctrine of Christ (2 Nephi 31–32) is patterned after the high priest’sascent through the temple and into the holy of holies.[2] For Nephi, the temple was clearly an important source for learning about the Messiah and his doctrine.

Ultimately, however, Nephi’s own testimony was not dependent upon any of these sources. Nephi had his own direct revelations and spiritual experiences that taught him about the life and ministry of the Savior. Early on, he was visited by the Lord (1 Nephi 2:16). He received a sweeping vision of the birth, life, ministry, and death of Christ (1 Nephi 11). And he heard the voices of both the Father and the Son testifying of Christ’s doctrine (2 Nephi 31:11–15).

None of this negates the important foundations laid by all these other sources. His own revelations were most often in response to seeking confirmation of his father’s prophetic teachings, and he may very well have been in the temple when he heard the voices of the Father and the Son. These sources laid the groundwork necessary for him to gain his own personal witness—but when he bares this final testimony, it is a testimony that stands on its own:

I glory in plainness; I glory in truth; I glory in my Jesus, for he hath redeemed my soul from hell. (2 Nephi 33:6)

We too can have strong personal testimonies by drawing upon the same sources Nephi did. The testimonies of parents or other family members (remember: Nephi also included the testimony of his brother, Jacob) can plant the seeds of testimony in our hearts, and even when we struggle to exercise faith we can lean on the testimonies of those closest to us. Thanks to the restoration, we also have the testimonies of living prophets to build upon. We have abundant scriptural witnesses in the Old and New Testaments, along with restoration scripture—the Book of Mormon, the Doctrine and Covenants, and the Pearl of Great Price. Again, thanks to the restoration, we can worthily attend the temple and learn of the Savior there.

But most important of all, we can all receive our own personal witness of Jesus Christ through the testimony of the Holy Ghost and through our spiritual experiences. Such experiences can be facilitated by and even happen when listening to the testimonies of family members, listening to the living prophets, reading scripture, or attending the temple. All things work synergistically to provide the important revelatory experiences needed so that we can all declare, with conviction, “I glory in my Jesus, for he hath redeemed my soul from hell.”