“I Cannot Read a Sealed Book”: Resources on Martin Harris, Charles Anthon, and the Sealed Book 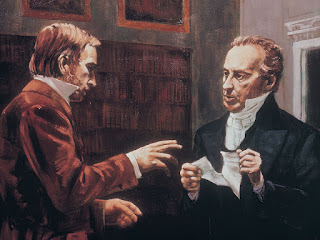 This week, for the Come, Follow Me curriculum, we study Nephi’s prophetic interpretation and commentary (2 Nephi 25–30) on the Isaiah chapters he just quoted (2 Nephi 12–24). As part of this prophecy, Nephi draws on additional words of Isaiah (Isaiah 29), adapting and expanding on them to prophecy of events in the restoration.  In particular, Nephi prophetically described an incident in which a man took some of the words from the Book of Mormon to the “learned” who asked for him to bring the book so they could read (translate) it. When the learned is informed that the book is sealed, he responds “I cannot read it,” or as it appears in Isaiah, “I cannot read it; for it is sealed” (2 Nephi 27:15–18; Isaiah 29:11–12).

This is widely believed to be referring to the incident in which Martin Harris went and visited Charles Anthon. In the most popular version of this story, Martin appeared to Charles Anthon and showed him characters copied from the plates, and Anthon gave Martin a certificate “certifying to the people of Palmyra that they were true characters.” Upon learning from Martin that the book was revealed by an angel of God, however, Anthon tore up the certificate and asked Martin to bring him the plates. Martin remembered, “I informed him that part of the plates were sealed, and that I was forbidden to bring them,” to which Anthon replied, “I cannot read a sealed book.”[1]

As noted in the Come, Follow Me Sunday School manual (quoting from Revelations in Context), “Anthon later denied the details of Martin’s account of their meeting.” Indeed, we have a few sources from Anthon and others who heard Anthon talk about the incident, and unsurprisingly they tell a bit of a different story—specifically denying having given any kind of positive identification of the characters.

So who should we believe? What really happen? Well, as tends to happen in history, the truth is somewhere in the middle, but in my view there are several reasons for accepting the gist of Martin’s version of events. To facilitate further study for those with questions or who may be interested in learning more about Martin’s visit to Charles Anthon and other scholars, I’ve put together the following list of resources.

McBride, Matthew. “The Contributions of Martin Harris,” in Revelations in Context: The Stories Behind the Sections of the Doctrine and Covenants, ed. Matthew McBride and James Goldberg (Salt Lake City, UT: The Church of Jesus Christ of Latter-day Saints, 2016), 3–4.

KnoWhys (from Book of Mormon Central)

“Why Did Martin Harris Consult with Scholars like Charles Anthon?” KnoWhy 514, May 7, 2019