On Columbus and Cumorah 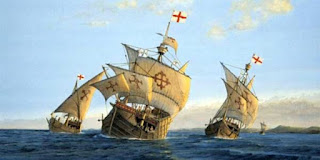 So, in connection with Come Follow Me this week, I recently talked about Christopher Columbus on this blog (though my ultimate point was about prophecy and translation). Book of Mormon Central also recently posted a KnoWhy about Columbus as the fulfillment of the prophecy in 1 Nephi 13:12.
The idea that Christopher Columbus is the “man among the Gentiles” mentioned is the long-standing traditional view among Latter-day Saints, but I do not think it is official doctrine. A person is free to think it is someone else, such as John Cabot, or Amerigo Vespucci, or others. My friend Russell Stevenson thinks it is Bartoleme de las Casas. I’ve argued with him about this a bit, because I think it is Columbus, but I don’t call him an apostate or anything like that. My point is, this passage is open to interpretation.

So with that said, there really is nothing wrong with Jonathan Neville preferring to view the man as John Cabot, as he indicated in his recent post about the Come Follow Me lesson, and in an older post from several years ago. His evidence and argument for this view is pretty sketchy, but that does not change that fact that he is welcome to this view. It is obvious enough that the real reason he argues for this is ideological—as one of the leading lights of the Heartland movement, he believes that only the United States of America is the Book of Mormon “promised land,” and thus he needs a man who sailed to that part of the Americas.

All that is fine and good. There is just one problem—believing the man is not Columbus makes Neville a hypocrite. And I want to be 100% clear that it is Neville’s hypocrisy that is at issue here, nothing else.

You see, Neville has one, single, obsessive talking point: the supposed “M2C intellectuals” are rejecting the prophets for not believing that the hill Cumorah is in New York. Nevermind that the Church has said the is no official position on any point of Book of Mormon geography, and the First Presidency and Quorum of the Twelve have explicitly asked that people stop claiming prophetic authority for their views. Neville—and many other Heartlanders—unflinchingly proceed to insist that to properly follow the prophets, one must accept the hill Cumorah in New York as the hill of the final Nephite battle.

But by this same logic, Neville is not following the prophets on who the “man among the gentiles” is. You see, every prophet, apostle, or Church leader who has ever commented on the subject, has said it is Columbus. This includes Gordon B. Hinckley, N. Eldon Tanner, Ezra Taft Benson (twice), Spencer W. Kimball, Wilford Woodruff (twice), John Taylor, George Q. Cannon (several times), Orson Hyde (several times), Orson Pratt (several times), and Brigham Young. All of these came during official Church conferences while these men were serving in either the First Presidency or the Quorum of the Twelve. Thus, there is long, strong, unanimous prophetic tradition declaring that the man is Columbus.

Now I stress again that for me, this does not make this point doctrine. I personally have no problem with people like Neville, or my friend Russell Stevenson, disagreeing with this tradition. But given the way Neville has argued about the location of Cumorah, he is being hypocritical. If he wants to reject long-standing, unanimous prophetic tradition when it suits him, then he must allow those who disagree with him on Book of Mormon geography to likewise reject long-standing, prophetic tradition without accusing them of not “following the prophets.” Otherwise, he deserves to be called out as not following the prophets himself.

And I repeatedly stress that it is Neville’s hypocrisy that is at issue because Neville himself is liable to misunderstand when people are not operating on his own paradigm. An example of this in in his own Columbus post, where he claims, “Basically, the Mesoamericanists say that Nephi prophesied about Columbus, and Columbus visited Mesoamerica, not North America, so therefore, the Book of Mormon setting must be Mesoamerica.”

This is not what Mesoamericanists like myself and Matt Roper (whom Neville cites in that blog post) argue. This straw man characterization is reflective of the way Neville and other leaders of the Heartland view think about the Book of Mormon and promised land, but it does not reflect the way scholars who favor Mesoamerica about this same topic. But Neville struggles to understand the nuances differentiating our paradigms.

If Columbus is indeed the man referred to in 1 Nephi 13:12, it is not evidence for the Mesoamerican geography. Columbus never actually went to Mesoamerica, though he did visit parts of Central America (south of Mesoamerica). It is evidence, however, that the narrow, USA-exclusivist interpretation of the Book of Mormon’s prophecies and promises about the “promised land” promoted by Heartlanders are wrong. And that is why Matt Roper and others bring this up in critiques of the Heartland model.

Most Mesoamericanists do not believe the “promised land” of the Book of Mormon is limited to where Book of Mormon events took place. Rather, we view all of North and South America as the Lehite promised land (which also happens to be what the prophets have consistently taught), even though we think the events recorded in the Book of Mormon had a more limited geographical scope. Thus, the man mentioned in 1 Nephi 13:12 does not need to have come to Mesoamerica to have come to the promised land. Anywhere in the Americas (and I would include the islands in the Caribbean, etc.) will do just fine.

Now, I am perfectly happy to allow Neville his John Cabot interpretation, even though it is contrary to what prophets and apostles have long taught. As with the location of Cumorah, this is a matter of tradition, not doctrine or revelation. So all I ask is that he grant those of us who disagree with him on the Cumorah question the same courtesy and stop accusing us of not following the prophets.
Apostles Book of Mormon Geography Book of Mormon Heartland Theory Christopher Columbus Cumorah Heartland Jonathan Neville Mesoamerican Prophets