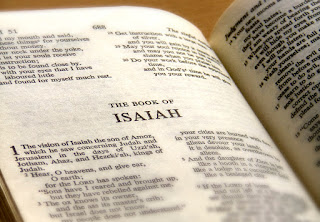 This week’s reading for Come Follow Me includes our first sample of “Isaiah chapters” (1 Nephi 20–21; Isaiah 48–49). While this is not as large of a block of Isaiah as Nephi would later quote from (2 Nephi 12–24; Isaiah 2–12), it is a sign of things to come, as it were. Nephi’s reason for quoting these Isaiah passages is because he “did liken all scriptures unto us, that it might be for our profit and learning” (1 Nephi 19:23).

The Come Follow Me manual for family and individual study invites us to consider questions about how passages from these chapters can be likened to the children of Israel, members of Lehi’s family, and ourselves. The Come Follow Me Sunday School manual likewise suggests that classes could discuss how Isaiah’s words apply to three groups: the (1) Children of Israel, (2) Lehi’s Family, and (3) People in Our Day.

The Sunday School manual also points out that we can better learn how to liken scripture to ourselves if we look carefully at “examples of how Nephi did it.” So in this blog post, I am going to focus on applications (or “likenings”) of these two Isaiah chapters to Lehi’s family. That is who Nephi had in mind as he selected these Isaiah chapters, and that is who he was likening them too (1 Nephi 19:23).
By going back through all we learned about Lehi’s family and their situation and experiences in 1 Nephi 1–18, and comparing it to chapters of Isaiah quoted in 1 Nephi 20–21, we can get a glimpse of why Nephi thought these chapters were relevant to his family and their experience—and thus glean some ideas on how to liken Isaiah to ourselves.

1. The People of Jerusalem (1 Nephi 20:1–2): The opening of Isaiah 48 addresses the people of Israel; they of “the holy city,” who “swear by the name of the Lord” but “they swear not in truth nor in righteousness,” nor do they “stay themselves upon the God of Israel.” This likely reminded Nephi of the people of Jerusalem in his own time, who rejected the message of the Lord’s prophets (1 Nephi 1:18–20).

2. Lehi’s and Nephi’s Visions (1 Nephi 20:3, 5–6): To the people of Israel, the Lord “declared the former things from the beginning.” The people had “seen and heard” the Lord’s revelations, and now He rhetorically asked, “will ye not declare them?” Like Israel’s prophets of old, Lehi and Nephi had both “seen and heard” visions from the Lord, and Lehi answered the Lord’s call to declare them to the people (1 Nephi 1:18–19; 9:1; 14:29–30). Through their visions, the Lord “showed the[m] new things … even hidden things”

3. Laman and Lemuel’s Stiffneckedness (1 Nephi 20:4, 7–8): Despite the revelations of the Lord, however, the people of Israel were “obstinate,” their “neck an iron sinew.” Thus, their “ear was not opened,” so they “heardest them not; yea … knewest not.” Laman and Lemuel were similarly “stiffnecked” (1 Nephi 2:11), and thus they “cannot understand” their father’s dream and “the Lord maketh no such thing known unto” them (1 Nephi 15:7, 9).

4. The Lord’s Promise to Nephi (1 Nephi 20:9–11, 19): Through Isaiah, the Lord promises the people of Israel that he will “cut thee not off,” because he has refined and chosen Israel “in the furnace of affliction” and he promises, “I will not give my glory unto another.”

This likely reminded Nephi of the Lord’s direct promises to him, that he was chosen to be a “ruler and a teacher,” and that his family had been chosen to inherit “a land which is choice above all other lands,” wherein they would prosper, and not be cut off from the Lord—if they kept his commandments (1 Nephi 2:20–22). It probably also gave meaning to the afflictions suffered in the wilderness, helping Nephi and his family see them as the refining hand of God in their lives. Nephi’s revelations also warned, however, that if his people rebelled against the Lord, they would be “cut off” from the Lord, and his glory would be placed on another the people—the latter day gentiles (1 Nephi 2:21; 13).

5. Lehi’s Prophetic Call (1 Nephi 20:12–16): Isaiah uses lots of imagery and vocabulary related to the divine council here. The call to the heavens, who “stand up together,” and are summoned to “assemble.” The reference to speaking in “secret.” The declaration that the Lord would do his will to Babylon. All of this evokes the proceedings of the divine council, which Lehi himself witnessed in his prophetic call, when he saw God on his throne, surrounded by angels, whom he compared to the celestial bodies, and from whom he received a declaration involving Babylon (1 Nephi 1:8–14).

6. The Lord’s Guidance in the Wilderness (1 Nephi 20:17): In Isaiah, the Lord reminds the people that it was he “who leadeth thee by the way thou shouldst.” Likewise, for Lehi and his family, the Lord led them through the wilderness using the miraculous Liahona (Alma 37:38–40).

8. A River and Sea of Righteousness (1 Nephi 20:18): To the people of Israel, the Lord Lamented, “O that thou hadst hearkened to my commandments—then had thy peace been as a river, and thy righteousness as the waves of the sea.” Lehi used similar imagery when counseling his wayward sons in the serene setting of the Valley of Lemuel. “O that thou mightest be like unto this river, continually running into the fountain of all righteousness!” (1 Nephi 2:9).

9. Redemption from Babylon (1 Nephi 20:20–21): The Lord promises that the people of Israel will ultimately be redeemed from Babylon. Lehi was one of the prophets who predicted the captivity in Babylon (1 Nephi 1:14). Even though Nephi and his family were being led away to a separate promised land, it no doubt was reassuring to them that their people would eventually be redeemed and restored in the land of Israel.

10. Branches of Israel in the Isles of the Sea (1 Nephi 21:1): The Lord next addresses “all ye that are broken off, and are driven out,” those who “are scattered abroad” upon the “isles” and “from far.” After their long voyage across the ocean and seas, Nephi no doubt felt like this was referring to him and his family, among others.

11. Nephi as the Lord’s Servant (1 Nephi 21:2–6): Isaiah describes a Messianic servant who’s “mouth [is] like a sharp sword,” and he is also like “a polished shaft.” The Lord calls him as his “servant,” and through whom the Lord would be “glorified.” Yet the servant fears that he has labored in “vain” and spent his “strength for naught.” He is assured, however, that “God shall be my strength.” The Lord then indicates that not only will he be a light to Israel, but the servant shall also be a “light to the gentiles, that thou mayest be my salvation unto the ends of the earth.”

Although Jesus Christ is the ultimate fulfillment of these passages, Latter-day Saints have also likened them to Joseph Smith. But it’s not hard to see how Nephi might have actually seen himself in this Servant Song.

He had, after all, wielded both sword and shaft (arrow) to accomplish the Lord’s purposes (1 Nephi 4:9–18; 16:18–32). The Lord had chosen Nephi over his brothers (1 Nephi 2:20–24), and yet all his efforts to persuade them to follow the Lord ultimately came to naught and likely felt vain. When his own strength slackened, Nephi took solace in remembering that he could trust in the Lord for support (2 Nephi 4:15–35). And after such a long ocean voyage, its not hard to imagine Nephi feeling that he was at the “ends of the earth,” where he and his family encountered gentiles to whom he could be a light in bringing the gospel of salvation through Jesus Christ. Nephi also knew his record would be a light to future gentiles who were in an “awful state of blindness” (1 Nephi 13:32–35).

12. Restoration of those in Isles of the Sea (1 Nephi 21:8–13): The Lord, through Isaiah, promises to care for and ultimately restore the branches of Israel scattered out to the isles of the sea. Given all that Nephi had been through and witnessed in his visions, and the status of his own family as a branch of Israel scattered across the sea, Nephi would have found the Lord’s promises here very comforting.

13. Gentiles Aid Israel (1 Nephi 21:22–24): The Lord also speaks of a time when the Gentiles “shall bring thy sons in their arms, and thy daughters shall be carried upon their shoulders.” The rulers of gentile nations would be “nursing fathers” and “nursing mothers” to Israel. This no doubt reminded Nephi of his vision, wherein he saw that it would be the Gentiles who would bring the Gospel to his father’s seed, and help restore Israel (1 Nephi 13). It may have also reminded him of his own situation, however. Arriving in a strange new land after a long voyage, Lehi’s family likely encountered “gentiles” who aided them in learning to survive in their new environment.

14. Nephi’s Slaying of Laban (1 Nephi 21:24–26): The Lord’s final promise to scattered Israel was “the captives of the mighty shall be taken away, and the prey of the terrible shall be delivered.” The Lord promises to contend with Israel’s enemies and fight their battles for them, and their oppressors would be “drunken with their own blood.” This must have reminded Nephi of that gruesome night when the mighty and terrible Laban was delivered into his hands by the Lord. He had been a fearsome enemy who had attempted to take the lives of Nephi and his brethren, but he was now drunk with “sweet wine” and delivered into Nephi’s hands (1 Nephi 4).

This week, in the Come, Follow Me curriculum, we are studying study Jacob 1–4. This includes Jacob’s temple discourse in Jacob 2–3, wherein he condemned the Nephite practice of polygamy (Jacob 2:24–30). This condemnation can be confusing since later Joseph Smith instituted the practice of plural marriage as a revealed principle, and the Latter-day Saints continued in this practice until around the turn of the century.[1]
We are all, of course, familiar with the justification given in Jacob 2:30, and the fact that the Lord did command the practice in the early part of the Restoration. The history of Latter-day Saint polygamy is not my strong suit, so I’m not really going to get into all that. If that is what you are interested in then I cannot recommend strongly enough the works of Brian Hales.[2] He has done the most thorough and comprehensive work, at least on the Nauvoo era, and made a lot of resources available online for free.
Instead, what I would like to talk about is the hist…