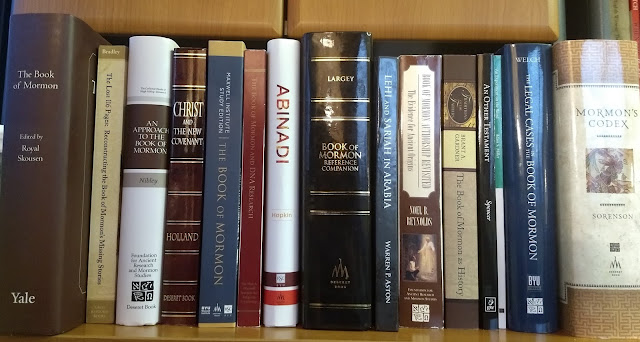 With the Come Follow Me curriculum focusing on the Book of Mormon next year, I thought I put together what I consider the “essential” library for Book of Mormon study. It is not intended to be a list of the absolutely, very “best books” (D&C 88:118)—though I’ve generally tried to include books that I think are of a high quality—but to be a “starter library” that is representative of the variety of academic approaches Latter-day Saints have taken when studying the text.

As such, it includes:


While this certainly does not include everything that could be included on a list like this, the goal is to provide the hypothetical beginner in Book of Mormon studies with the “essentials” they need to jump-in and get started; help them get a sense for what’s been done, who’s influential, and where things are headed. How well I accomplished that goal will, ultimately, be in the eye of the beholder, but quite naturally, I think I’ve done a mighty fine job.

Anyway, without further ado, here is my proposed list of 35 books for the “essential” Book of Mormon Studies library.

P.S. To avoid being self-serving and self-promotional, I’ve excluded the two Knowing Why books from Book of Mormon Central, of which I am a co-editor and major contributor; but obviously I think those are great and that everyone should buy them! (hint; hint)


P.P.S. I didn’t include any forthcoming works, but there is always new stuff to keep an eye out for. Among the things folks may want to keep on their radar is the Brief Theological Introductions series by the Maxwell Institute (first volume should be out soon, I suspect), and Brant A. Gardner’s Labor Diligently to Write, which is being released serially by Interpreter and should be available as a full book by the beginning of 2020. John W. Welch also a has forthcoming book on Alma 5 (with Covenant) and Donald W. Parry will be releasing a new book on the ancient Hebrew literary features of the Book of Mormon (with RSC, I believe). Book of Mormon Central will also feature weekly commentary from John W. Welch throughout the year 2020.

Editions of the Text

16. Brant A. Gardner, Traditions of the Fathers: The Book of Mormon as History (Salt Lake City: Greg Kofford Books, 2015).

18. Richard Dilworth Rust, Feasting on the Word: The Literary Testimony of the Book of Mormon (Salt Lake City and Provo: Deseret Book and FARMS, 1997).

22. Jeffrey R. Holland, Christ in the New Covenant: The Messianic Message of the Book of Mormon (Provo: Deseret Book, 1997).

24. John W. Welch, Legal Cases in the Book of Mormon (Provo: BYU Press and the Neal A. Maxwell Institute for Religious Scholarship, 2008).

26. LeGrand L. Baker and Stephen D. Ricks, Who Shall Ascend into the Hill of the Lord? The Psalms in Israel’s Temple Worship in the Old Testament and the Book of Mormon (Salt Lake City: Eborn Books, 2010).