The Book of Abraham and Logical Fallacies 101 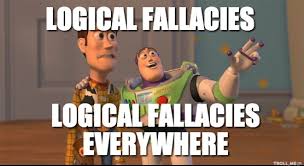 In a recent Facebook discussion on the Book of Abraham, I asked the question, “Why should I trust Ritner over Muhlestein?” I posed this question after reading both Kerry Muhlestein’s arguments for human sacrifice during the Middle Kingdom period of Egypt (Abraham’s era), as published in the Journal of Economic and Social History of the Orient 51/2 (2008): 181–208, and Robert Ritner’s counter-argument in response to the Church’s new Gospel Topics essay. I offer an evaluation of Ritner’s critique and gave my reasons for finding Muhlestein’s argument more persuasive. After a little prodding, I got a couple of great answers that give me some additional perspectives to consider on this question.


As a non-expert on Egyptian things, or even ancient Near Eastern things, I try to read different points of view carefully and critically evaluate them to the best of my ability, but I am not going to let someone else hijack my opinions simply because they appear to be smarter than me or to have read more than I have. Especially since the experts here are not unanimous (Muhlestein, too, is an Egyptologist, after all). So, while I appreciate the alternative points of view, I am going to continue to do my own thinking on the matter.

But, after getting some great responses, I also got this from a certain anti-Mormon who is rather well-known for his abrasive hostility toward any and all who defend the faith. In answer to my question, he states:

Easy. Because Kerry has a history of being wrong about things no Egyptologist should be wrong about, and he’s borderline dishonest at times. Oh, and there is the fact that Ritner is literally Kerry’s teacher’s teacher.

Whether or not Muhlestein has been “wrong about things no Egyptologist should be wrong about,” or “borderline dishonest” I will not judge. I am, after all, not an expert, and neither is this critic. While I am more than willing to do my best to judge between the pronouncements of different experts, I would never dare to say that either Muhlestein or Ritner is so obviously wrong that he is dishonest or should not be an Egyptologist. That would be incredibly presumptuous of someone who completely lacks any training in the field. (Of course, this particular critic has never shied away from such brazen chutzpah when skewering “apologists.”)

To be certain Muhlestein’s wrong on something requires either (a) one has the expertise to know, or (b) one trusts some other expert who says he is wrong about it. (I think I know what this critic has in mind, and if I am right, then Ritner is again the expert he is relying on to say Muhlestein is wrong.) Since the issue is why one expert should be trusted over another, this just becomes circular reasoning:


I am looking for some kind of cogent analysis that explains why one expert (Ritner) should be trusted over the other expert (Muhlestein). So, this kind of reasoning does not really get us anywhere. This is especially so since, regardless of whether Muhlestein has been wrong on some other issue(s), that is no guarantee that he is wrong about the topic under discussion. Thus, this is really just a type of red herring, meant to distract from the current topic at hand. It is also a sort of ad hominem, and specifically it is poisoning the well, since it attempts to simply discredit one expert (Muhlestein), rather than actually explain why he is wrong on the topic at hand.

It could also be argued that this either a hasty generalization, or a sweeping generalization. These are two opposite fallacies, but if you’ll bear with me, I’ll explain how this could be both. The critic is not clear about what things Muhlestein is supposedly wrong about, or how often he is wrong, so it is impossible to really know if it is a general rule that he is wrong. However, based on my background knowledge, I suspect he is basing this on a very specific claim Muhlestein has made in the past, and hence this appears to be a hasty generalization derived from a specific case. Then, he is applying that generalization to a specific case, for which independent analysis is available. Hence making a sweeping generalization without considering the specifics of the case in question.

Then there is his assertion that Ritner should be trusted because he is “literally” Muhlestein’s “teacher’s teacher.” This is nothing more than an appeal to authority, and a rather illogical one at that. Can students never come to know more than their teachers? By this logic, the very first Egyptologist in the world would be the smartest, and greatest authority on all things Egyptian—after all, someone is Ritner’s teacher, who also had a teacher, who also had a teacher, so on and so forth until we reach the first Egyptologist. But, at least in theory, scholarship is getting better and better, as each generation builds on the last, “standing on the shoulder of giants,” if you will. Thus, if Ritner being Muhlestein’s “teacher’s teacher” means anything, it is that Muhlestein’s scholarship is two generations down the line, and hence better. Not that I would actually make that argument—to do so would be to commit the sweeping generalization fallacy.

Did you even know that so many logical fallacies could be committed in just two sentences? I’ll stick with my own best judgment of the differing points of view, after careful reading and critical thinking on arguments from both sides. I’ll happily supplement that with the informed commentary of those who have done the same. But you can keep your fallacy ridden rants, thank you very much.
Book of Abraham Kerry Muhlestein Logical Fallacies Robert Ritner