Moorman on Mormons: A Review of Camp Floyd and the Mormons 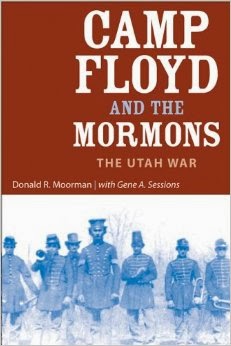 Note: The Following was written for my Utah History class. Given its relevance to Mormon History, I thought I would post it here. The Bold, run-on sentence stating the authors thesis and the repetitive opening statement for each paragraph were requirements for the paper. You know I do not normally write that poorly. I would just like to add to this that due to the way I had to write the paper, I do not think you can get a sense of just how much I enjoyed this book. It was excellent reading on an interesting topic. Whatever else might be said of Donald R. Moorman (d. 1980), he was a great writer. This was one of the most well-written history books I have ever read.


One of the weaknesses of this book is the lack of maps, which would provide an important visual dimension. Several of the chapters in the book contain lengthy, confusing, and difficult to follow descriptions of travel routes taken by military expeditions, emigrant wagon trains, and others. These descriptions make frequent reference to significant landmarks by name, such as various mountains, canyons, rivers, valleys, and other features. These descriptive explanations of the routes traveled, however, only serve to add to the confusion as it is difficult to follow along. This is especially true in chapter 8, which discusses several exploratory expeditions. The single map in the front of the book is too generic and lacking in detail. Multiple, detailed maps, scattered throughout relevant parts of the book, would significantly aid the reader in understanding and visualizing the events in the text.

Another weakness of the book is that the chronology of events is very difficult to follow. Moorman treats the various facets of the Utah War separately in each chapter, which serves his purposes well. However, this mode of organization made it difficult to understand each facet within the larger context of the surrounding events. For example, it would have been easier to understand why news of the Mountain Meadows Massacre motivated Garland Hurt to get out of town had it been made more explicit that the massacre had only happened a few days earlier. A simple way to resolve this difficulty would be to include a timeline toward the beginning or end of the book. Such a tool, with the series of major events listed along its side, would enable the reader to get a sense of the broader historical context quickly.

One of the strengths of the book is the character development. With skill and acumen, Moorman describes such historical persons as Brigham Young, General Albert Sidney Johnston, Governor Alfred Cumming, and many others in ways that bring out their personalities, backgrounds, and highlight their interactions with one another. Take, for example, the introduction of Thomas Leiper Kane into the narrative. Rather than merely describe the role Kane played in deescalating the conflict, Moorman takes time to describe his background as a friend to the Mormons and champion of the unpopular who had genuine concern about the direction things were moving, and who took it upon himself to do all that was in his power to avert the crisis, and did so at great personal risk. Kane is only one rather minor example of the many historical persons Moorman manages to bring back to life.

Another strength of this book is the balanced approach. The Utah War is full of delicate historical issues, where the temptation to vilify some and glorify others can be strong. Moorman effectively balances his portrayal of Mormons, military personal and other non-Mormons, and Indians alike. Nowhere is this difficult balancing act more evident than when Moorman describes the Mountain Meadows Massacre. In describing an event that is often polarizing for people today, Moorman provides a narrative that makes the tragedy all at once understandable, yet no less gruesome.

Overall, I personally enjoyed reading this book. Having an abiding interest in Mormon history, I found Moorman’s book to be a great-flowing narrative of a particularly important saga in Mormon and Utah history. With the Mountain Meadows Massacre being an event in Mormon history that tends to receive particular attention, it was great to be able to some broader context on the rest of the Utah War and the conflicts and anxieties that were swirling around the Utah territory at that time.
Church History Donald R. Moorman Mountain Meadows Massacre Thomas L. Kane Utah War