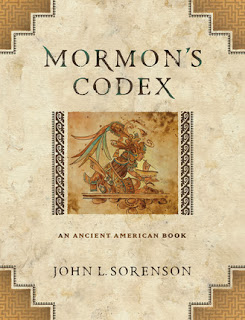 The first rule of historical criticism in dealing with the Book of Mormon or any other historical text is, never oversimplify. For all its simple and straightforward narrative style, this history is packed as few others are with a staggering wealth of detail that completely escapes the casual reader.

Some books are just a little over 100 pages, while other books spill that much ink just talking about methodological considerations. Any guesses as to which kind of book the 826 page Mormon’s Codex: An Ancient American Book is? The first six chapters, equaling 115 pages, of Sorenson’s new tome comprise “Part 1. Orientation.” Yes, Sorenson follows Nibley’s first rule to “never oversimplify.” These chapters focus on laying the groundwork for the correlation Sorenson intends to make between Mesoamerica and the Book of Mormon record. Such lengthy introductory material is not for the faint of heart, or those who wish to jump right into the “meat” of the book (i.e., the evidence for the Book of Mormon in Mesoamerica), but all the best books have these sorts of sections (though they don’t all span across more than 100 pages!). Understanding the method being applied is an important part of evaluating the quality of the arguments, and understanding how to subsequently apply those arguments and evidences. (Even good evidence/arguments can be misused when there is a lack of methodological rigor.)


Despite its being called “Introduction,” I still read the first chapter. As in most introductions, Sorenson explains what the book is about, and this is naturally were the reader learns about the methodology Sorenson intends to employ. Sorenson notes that the problem the Book of Mormon presents is a familiar one to scholars. “The Book of Mormon belongs to a class of texts that claim or appear to be historical documents and therefore invite comparison with what archaeology and other historical disciples have revealed about the claimed place and era of origin.” Hence, the method is to do just that. “The primary method employed in this study will be to compare statements in the text of the Book of Mormon with scholarly reports on the results of archaeological investigations and related scholarly research…. If the document in question agrees at a large number of points—as it does in this case—with what the external sources tell us, then the text must be deemed historical.” (p. 3)

Of course, this general method is not new or unique to Sorenson. He is not the first to use it, and he is not even the first to apply such a method to the Book of Mormon. (As Sorenson notes on pp. 9-10, Nibley began apply this sort of method to the Book of Mormon long ago.) It is the basic methodology used in cases like the Book of Mormon by all kinds of scholars, though the exact application and sophistication of this method varies from scholar to scholar. Here, Sorenson appeals to the method as applied to the Bible by William G. Dever and Kenneth A. Kitchen (pp. 7-9), noting in particular that Kitchen’s is “more to my taste” because it has “broader evidential scope” (p. 8). That is, while Dever narrowly focuses on archaeology, Kitchen expands the scope to “a wider range of information made available by the complete array of methods used to study the ancient world such as art history, language, and epigraphy, as well as archaeology” (p. 9).

Despite expressing preference for Kitchen’s “more anthropological and hence stronger” approach (p. 9), Sorenson spends more time describing Dever’s methodology of “convergences” between text and archaeology. It is evident, however, in the subsequent pages, which include some discussion on the limitations of archaeology and the complexity of interpreting in context with other disciplines, that Sorenson himself intends to draw on the same kind of wider, more anthropological scope of evidence that Kitchen uses. I draw from this the impression that Sorenson intends to apply a method more akin to Dever’s to a set of evidence more like Kitchen’s.

Sorenson’s method is not going to be exactly like Dever’s, however. For more than a year now, Sorenson has conspicuously chosen to use the term “correspondences” as opposed to Dever’s term “convergences,” despite using Dever to introduce the concept.[2] In Chapter 2, entitled “Getting Ready for the Comparison,” Sorenson provides this clarifying comment.

Dever’s term convergences has many synonyms—correspondences, parallels, analogies, similarities, agreements, conformities, counterparts, and congruencies. Each has a slightly different shad of meaning. Convergences may suggest distinct processes that end up with similar results; parallel connotes a general or unfocused degree of similarity…. The comparisons upon which this relies will be called correspondences, in the dictionary sense of “a particular similarity.” Occasionally, synonymous terms will be employed to avoid excessive repetition, but no variation in meaning is intended when that is done. (p. 16)

This careful statement suggests to me that Sorenson’s word choice is deliberate. Sorenson understands a correspondence to be something different from a convergence, and hence his choice to use a different word than Dever suggests, to me, that Sorenson won’t quite be doing the same thing Dever does. It is Sorenson’s own unique variation of this common general method of comparing a text to its alleged setting.

You can learn more about Sorenson particular understanding and use of correspondences, and even see a few preliminary examples, in his sixth chapter, “About Correspondences” (pp. 109-115). The rest of chapter 2 (pp. 17-25) consists mainly of a summary of his important Mormon’s Map, establishing the general configuration of Book of Mormon lands,[3] and then a bullet list of the geographic features of Mesoamerica, showing the correlation. The purpose of this chapter is, of course, to establish the location we need to start looking at for comparisons. “Without a geography in mind, comparison of external materials with the book’s text will lead nowhere useful” (p. 17). Chapter 5, “The Nature of History in the Book of Mormon” (pp. 104-108), likewise summarizes the content of Sorenson’s previous work on the Book of Mormon as “lineage history.”[4] Understanding the nature of the Book of Mormon record as it relates to history is obviously an important preliminary to making historical comparisons. Although it is a summary previous work, I still gained new insights from this latest iteration of a very important idea.

Chapters 3 and 4 make up the bulk of this “orientation” (pp. 26-103). They are also the most unique and important contribution of the books introductory phase. In chapter 3, “The Book of Mormon in Culture History Terms,” Sorenson provides a comprehensive summary of the Book of Mormon. But in this summary, Sorenson doesn’t spend anytime talking about revelation or miracles. He speaks of tribal, ethnic, and class differences, culture shock and socio-cultural traits, “cults” (in a technical sense) instead of “churches.” You see, while Sorenson no doubt believes in the miraculous events spoken of in the Book of Mormon, Sorenson is aiming to describe the narrative of the text in terms that an anthropologist would use. And while some other LDS anthropologists might quibble with some bits and pieces of his interpretation, overall it is a fair reading of the text.

This is important because one tendency we have as Latter-day Saints is to mentally and verbally affirm the Book of Mormon as real history, but then treat the text like it is a set of fairy-tales. If we are going to believe it is history, we should read it like history. This kind of reading of the text helps put flesh and bones on the people in the text, helps readers better relate to the seemingly larger-than-life characters, and makes us aware of the implications that understanding the Book of Mormon as history really has. Of course, scholars have been speaking of the Book of Mormon in culture history terms for some time now in their various papers and books; but this is, to my knowledge, the first time that a full summary of the book has been made in those terms, and done so relatively unattached to any other argument or theory (though there are a few occasional references to real world locations in Mesoamerica, for the most part readers can gain insight from this without necessarily excepting the Mesoamerican setting). As such, this is a valuable and useful contribution to the literature on the Book of Mormon.

Chapter 4 comes from the other direction. “The Early Culture History of Mesoamerica,” provides a summary of socio-cultural trends in Mesoamerica from about 2000 BC—AD 400 without any reference or correlation to the Book of Mormon. Sorenson is careful to note where knowledge is more limited than usual, and often mentions various interpretations. When he is proffering scenarios that fall outside the mainstream views, he always mention the more orthodox view before going over the evidence that he sees as suggesting something different. What’s more, although Mormons like John E. Clark, Richard D. Hanson, Gareth W. Lowe, Ray T. Matheny, and Bruce W. Warren frequently show up in the footnotes (though they are by no means the bulk of the sources cited), not a single source aimed at a Mormon audience is used in this section.

This chapter is important because it gives a broader view of Mesoamerican history, not so narrowly focused on the Book of Mormon. Most interested Latter-day Saints probably lack much of any kind of background on Mesoamerica, so having a go-to chapter where readers can get somewhat oriented to Mesoamerican culture history is another contribution that should prove useful and valuable.

Overall, Sorenson gives his readers a solid and thorough “orientation.” Parts of it give the all-important explanation of methodology, others provide the summaries of his previous work necessary to make this book comprehensible to those who haven’t read his other books and articles (or at least haven’t read them recently), while yet others are all-new and all-important contributions to the literature on the Book of Mormon in Mesoamerica. Having been properly oriented, I am excited to sink my teeth into the meaty section of socio-cultural correspondences!

Moroni appeared to Joseph Smith in 1823, but Joseph was not allowed to retrieve the plates until 1827. Why? Besides the need for Joseph’s own personal growth, and the fact that the timing coincides with important dates in the Jewish calendar, there are several other reasons why it was prudent to wait a few years before beginning the translation and publication process for the Book of Mormon. The reality is, had Joseph retrieved the plates in 1823, he would not have had the means to make much progress on the translation and publication for several more years.
President Russell M. Nelson recently invited us to “immerse [ourselves] in the glorious light of the Restoration” and to prepare to “commemorate the very foundations of the restored gospel.” This week’s Come Follow Me lesson also encourages to consider the question: “what evidence do we find that God was involved in the bringing forth of the Book of Mormon?” In my own effort to study the early events of the restoration, and ident…