A Second Note on Archaeology and the Book of Mormon 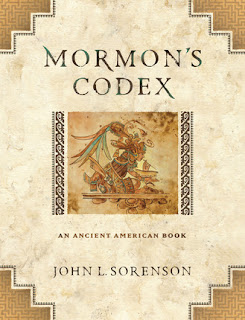 Last week while doing my homework I came across a tidbit that I thought was interesting in relation to the Book of Mormon and archaeology. Well, this week I find myself increasingly distracted from my homework by John L. Sorenson’s Mormon’s Codex, the most extensive treatise on the Book of Mormon and archaeology yet to be published. Though still only in the third chapter, I found another interesting tidbit I thought worth sharing.


As a reminder, last week I noted that small groups, like the early Christians, are unlikely to leave archaeological traces, and that, according to Rodney Stark, the early Christians didn’t leave a trace until about AD 180, at which time Stark estimates there were 100,000 Christians. Thus, how likely is it that the very small migrating groups of the Book of Mormon would leave a distinguishable trace in Mesoamerica (or anywhere else for that matter)? I also noted that while Book of Mormon populations did eventually expand, it would be a few hundred years before they reached the kind of size expected to leave a trace; and there is no telling what their material culture would have looked like by then. As I put it,

“By that time, what would their archaeological “trace” look like? How much of their material culture would manifest Old World roots? How do we go about distinguishing a Nephite pottery shard from a non-Nephite one?”

With that in mind, some important observations from Sorenson add to our understanding. Sorenson beings his third chapter with important caution: “The problem of relating historical (documentary) and archaeological (or culture history) materials proves to be complicated” (p. 26). This is true of the Bible, or any ancient document, and is especially true of the Book of Mormon, where lack of the original plate text adds an extra layer separating the text from the ruins. Sorenson continues:

Before one can compare the Book of Mormon record with the findings of archaeology, the text needs to be interpreted (or “read”) as far as possible in terms comparable to those used by archaeologists. Then, to approach the comparisons from an archaeological point of view, the archaeological findings need to be rendered “historical” enough to make comparison feasible. (p. 26)

In other words, both the text and ruins must be interpreted in ways that make them mutually intelligible. Critics have long insisted that when Latter-day Saint scholars do this with the Book of Mormon, they are ignoring, or worse yet “twisting” and “contorting” the “plain meaning” (or even the “plain English meaning”) of the text. But even with the Bible, the “plain” or obvious meanings we see in the text (even if you are reading in the original language) are often way off base. “The problem with the obvious, Tim,” explained Lieutenant Megan Donner, on the first episode of CSI: Miami, “is it can make you overlook the evidence.”

When the Bible is read against its own cultural/archaeological background, the once obvious meanings often prove to be wrong and the text tends to me something else entirely. Are biblical scholars “twisting” and “contorting” the “plain meaning” of the text? Perhaps in a few cases some such scholars are (this will happen in every discipline), but few would make the case this is universally so. I see no reason why Latter-day Saints should be barred from doing the same with the Book of Mormon. As Blake Ostler once put it, “We Latter-day Saints are entitled to read the text in light of the best scientific evidence we have available.”

Anyway, getting back to Sorenson, comparing text and ruins is complicated and requires interpretation. Chapter 3 is Sorenson’s attempt to interpret the Book of Mormon in archaeological terms (note, this is not his comparison to archaeology, which comes later, rather this is a necessary precursor). While I suspect other LDS anthropologists and archaeologists will quibble with this or that interpretation, in general Sorenson is offering a pretty straight forward reading of the text. When Sorenson comes to explain the Lehite and Mulekite groups arrival in the Americas, important observations are brought to light by reading them as an anthropologist/archaeologist would:

Both parties were composed of people with only limited skills in the overall culture of the land of Judah, as would be the case with any fractional segment of the population extracted from a complex society. For example, it is doubtful that any of them knew anything substantive about pottery making (a commercial activity in their homeland) or constructing major public buildings. In addition, they arrived culturally impoverished especially in technology, by their arduous journeys (on the order of 9,000 miles by sea for the Mulekite party, and for the Lehites an eight-year trek of 1,700 miles through Arabia followed by a voyage of more than 20,000 miles)…. For Lehi’s group, there was additional selectivity as Nephi1, a major gatekeeper for such culture as he bequeathed to his descendants, consciously rejected many of the elitist and cultic aspects of Judah’s normative Iron Age culture (2 Nephi 25:1-2). (p. 33-34, kilometer measurements, originally appearing in brackets after the miles, silently omitted)

So not only are we talking about a very small group, with limited skills to bring over from the Old World in the first place, we are also dealing major deculturation of those few immigrants. But Sorenson goes on:

Along with deculturation came the shock of needing to adapt to novel environments – the South Arabian coast (where the party of Lehi may not even have planted crops), sea travel en route (probably a minimum of two years at sea for Lehi and company and at least one year for the Mulekites), followed by immersion in the moist tropical environment of Mesoamerican coasts where they landed. The impacts of such changes on their cultural capacities must have been strong. (p. 34-35)

It must be remembered that these are not groups that maintained continuous and long term contact with their previous culture (in contrast to the Norse settlers of North America some critics like to point to as analogous to the Book of Mormon settlers). How much Old World skill and culture would they have really brought with them? How much of that would have survived the journey and the many cultural transitions they necessarily had to endure? How long would those remaining elements have lasted? While we know that some religious and linguistic aspects were maintained (at least by the social elites who kept the record), how much material culture – the “traces” left behind that help us identify past peoples - was persevered?

These important questions need to be added to those posed in my previous note on archaeology and the Book of Mormon. With these insights in mind, it makes it seem even less likely that there would be anything distinguishably “Old World” about their material culture by the time Lehi’s decedents reached the point where they were big enough to leave a trace. None of this is to excuse the Book of Mormon from being supported by any kind of archaeological evidence. Sorenson’s massive tome makes it clear that there is plenty of such evidence available, of varying strengths and degrees. Rather, the point is to identify just what kind of evidence we ought to find, and then balance our expectations accordingly.
Book of Mormon Book of Mormon Authenticity Book of Mormon People CSI: Miami John L. Sorenson